Introduction: Jesus’ Cross-Words and the context

Today we continue our look at the words Jesus spoke from the cross, His ‘Cross-Words’. We can be amazed at what those Cross-Words have already revealed about His nature and the significance of His suffering and death. Today’s Cross-Word is “Father, into Your hands I commit my spirit.” This may have been the last word Jesus spoke from the cross, or perhaps the second last. We don’t know for sure, because none of the Gospel accounts record all seven of Jesus’ words, or claim to record the words of Jesus from the cross in order. However, this entrusting statement of Jesus is packed with meaning and significance – a meaning that we want to dwell on, meditate on, reflect on and learn from this morning. First, we will concentrate on what this Cross-Word can teach us theologically and spiritually. Then we will focus on what implications and relationship these teachings have on our lives as God’s people.

Recall, first of all, the context of these words of Jesus. Jesus, although He had done nothing wrong, although He had never sinned, although He had always accomplished the will of God Almighty as He ministered to people here on earth – Jesus found Himself hanging on a cross, between two criminals. Jesus, too, had been accused, arrested, hastily tried and questionably convicted of blasphemy, subverting the nation, inciting rebellion, opposing Caesar. Hanging on the cross, Jesus endured the insults and jeers and taunting of the religious leaders, of the Roman soldiers, of the crowd. Not only that, He felt the real, gut-wrenching, soul-stirring, heart-stopping, God-forsaken feeling of being… well… forsaken by God. After all the suffering – the physical suffering of his trial, the whippings, the mistreatment at the hands of the soldiers, the gouging of a crown of thorns into His brow, the physical suffering of being nailed to the cross and of labouring for each breath, the mental anguish of the rejection and insults of the people and the emotional turmoil of being forsaken by God – yes, after all this was said and done, Jesus finally called out with a loud voice: “Father!” If He had spoken only that one word, it still would have been significant.

You know how cold and formal a human relationship can be when there are tense feelings. You can tell how close the relationship is by the form of address between the two parties: when a mother uses her daughter’s full name, “Jennifer Victoria Taylor!”… in that moment, you know that they aren’t close, that something has happened; when a son, with mock respect says, “OK, I’ll do it Father”… in that moment, you know that there is a rift in the relationship.

There was none of that cold formality on the cross. Jesus knew His relationship with the Father not only still existed but was very precious, and He affirmed: “Father!” That one word emphasizes trust.

When, on the cross, Jesus said “into your hands”, it showed His deep, implicit, never-doubting trust in the Father, His Father.

When Jesus added the words “I commit” this includes an element of surrender to the Father’s will. It is really simply a continuation of Jesus’ prayer in the Garden of Gethsemane: “Not my will, but thine be done.” Jesus wasn’t about to take matters into His own hands – not at this late stage of the plan of salvation. In the Garden of Gethsemane, after praying “Your will be done,” He was arrested and Peter, in his enthusiasm to defend his teacher cut off the ear of the high priest’s servant. Jesus said to Peter: “Put your sword back in its place for all who draw the sword will die by the sword. Do you think I cannot call on my Father, and He will at once put at my disposal more than twelve legions of angels? But how then would the Scriptures be fulfilled that say it must happen in this way?” Jesus did not accept human help when he was arrested, nor did he call on divine help when He was arrested. Jesus would also leave things in the Father’s hands on the cross. After all, it was the Father’s plan from the beginning, and it was the Father’s people who were at stake, and it was the Father’s great love that just now, yes even and especially from the cross, was being fully demonstrated and wonderfully realized. “Into your hands,” Jesus surrendered. “I commit” Jesus surrendered. No, the cross wasn’t the place to have second thoughts about saving humanity, nor the place to have an identity crisis or a power struggle within the Godhead. The will of the Father and the will of the Son would be one, for the Father and the Son were themselves one. “Father, into your hands I commit” showed clearly that unity.

“I commit my spirit.”  “When He had said this,” Luke tells us, “He breathed His last.” So, what died there on the cross of Calvary on that first Good Friday? Did God die? Did God the Son die? Well, yes and no! Jesus’ body, the physical, human part of Him died, just like every one of us will also die. He, however, died a painful, torturous death. But – and that’s usually a BIG word, and in this case it is an ENORMOUS word! – BUT, the spirit of Jesus did not die. He had committed, given over His spirit to the care and keeping of the Father. Being fully divine, Jesus was and is pure spirit. “God is spirit,” John 4:24 tells us. In human form, Jesus, of course, had a physical body, but He was still in very essence ‘spirit.’ His spirit did not die; only the outward shell of His physical body was crucified, dead and buried. Oh, and that’s the key word of our crossword puzzle today… ‘spirit.’

5. The implication for us – a spirit inside

Already, I believe, you can see the implication of that for us and for our lives and for our faith. Perhaps none of you here today are considering the thought of dying soon – although that thought, and preparation for that time, ought never be so far away from our thinking. What Jesus is saying in this Cross-Word is that there is the opportunity, better yet, the promise for you and I to not really or completely die at the time of death. Like Jesus, only our body will die, not our spirit! You see, when God created the human race, when God first made Adam and Eve, He not only breathed into them His breath of life, but He also created them in His image. “So God created man in His own image, in the image of God He created him, male and female He created them.” What does being created in God’s image mean? Well, among other things, it means that immortality, eternity was built into us by the great designer, the almighty and eternal creator.

Maybe I can use a puppet to illustrate: When I do a puppet show, what the children see is the puppet, the cloth, the plastic eyes, the fake hair. The children know, however, that the puppet is not real; they know that there is a hand underneath. What’s real about the puppet is not what you see, but what is inside what you see. What is real about us is not our bodies – oh, sure, that’s what people see – but what’s real about us is our spirit, our soul, the inner person, the person that God has called us and created us to be. And that part of us never dies…. if….

6. Jesus as Saviour and Lord

If we commit our spirits, our lives, if we surrender our spirits, our lives into the Father’s hands. Christians speak of believing in Jesus as your own personal Saviour and Lord. To say that Jesus is your Saviour – and you have to know that that encompasses the whole sequence of events surrounding Jesus’ suffering and death (to set us free from sin, death and the devil) and His resurrection (guaranteeing our future resurrection) – to say that Jesus is your Saviour involves some committing of your spirits, your lives to Him in trust and faith. And this must be personal. When you stand before God on the last day, it’s not going to be good enough to say: “My grandpa and grandma were Christians!” or “My mom and dad went to church almost every Sunday!” or “I had a great uncle who was a pastor!” It will not be your grandma’s faith nor your parents’ church activities that stand you in good stead with God. To say that Jesus is Saviour does you no good unless you can say with all honesty and sincerity, from the bottom of your heart – “Jesus is MY Saviour!” “He died for ME!” “He has forgiven ME MY sins!” “He rose again for ME!” “Yes, Jesus really is MY Saviour!” That is a real, that is a personal trust and belief in Jesus, who did die for the sake of all people, but who died especially for YOU! When you say “I commit,” you are saying “I believe in Jesus as MY Saviour!”

To say that Jesus is my ‘Lord’ involves a little bit more – here’s where the surrender part of “I commit” comes in. Faith is a commitment to Christ, but surrender is more. They really should go hand in hand – that is, surrender should immediately follow faith. To commit or surrender my spirit, my life to Jesus means that He is my Lord, my Master, my Ruler. He’s the boss, He’s the general, He gives the marching orders for my life, He’s # 1 – not me! It’s YOUR will be done, Jesus, not mine. He’s the king, I am the loyal citizen.

To say that Jesus is my Lord is to say that everything that I do, everything that I say, everything that I think, everything that I am reflects His Lordship, His will in my life. Someone has said that Christianity is believing, living, praying, breathing Christ! That’s true! Christianity is not an abstract, shallow belief in some historical figure. A Christian life is not characterized only by ‘religious’ adherence to the Sunday morning holy hour. In fact, someone else has said that Christianity is not a religion at all, it is a way of life, a relationship. That’s true, too! Jesus’ Lordship is shown in our whole life, not just the Sunday morning worship service. His Lordship is shown by our honesty in all dealings with others, by our love for others, by our total surrender and obedience to His will by our words, by our thoughts, by our deeds. His Lordship is ultimately shown in every area of life, in all of life. That’s a goal for which you can strive, a challenge which you can accept – to commit your spirit, your whole life to the Lord Jesus. Why?? Because He committed His whole life, even to the point of death for you, to save you, so that you can be His for all eternity. Yes, our committing of ourselves, our surrender of ourselves to Jesus is based on Him, on His work on the cross, on His relationship with His Father, on His relationship with us. He is our Lord because He is our Saviour!

My sincere prayer for all of you is that Jesus’ words from the cross: “Father, into your hands I commit my spirit,” would be your constant prayer not only during this Lenten season, but also the constant prayer of your lives, displaying that you do have a relationship of trust and faith in God, and that, based on that trust relationship, you also commit your whole being to His Lordship, to His care and keeping, and to His service. Amen. 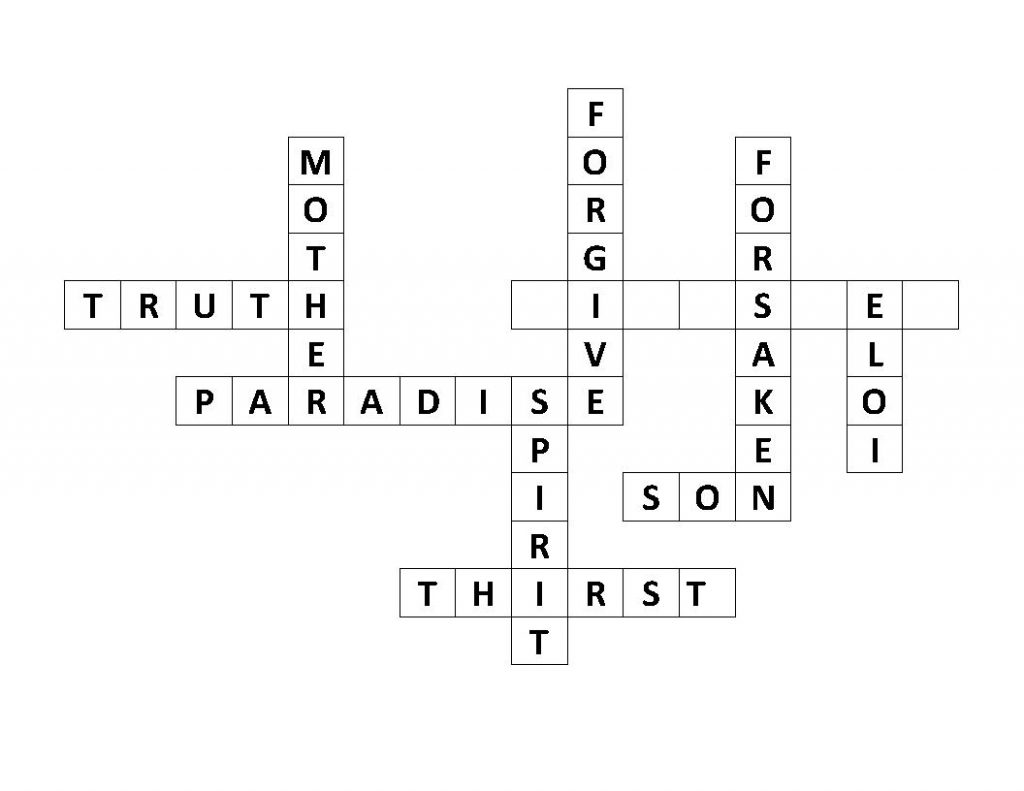