Have you ever noticed that beverage commercials on television seem to have a knack for making a person thirsty. Whether it’s beer commercials, coffee or milk, after watching one you almost feel like getting up off the couch and going to the kitchen to quench your thirst. One of my favourites was a soft drink commercial from a number of years ago. It showed a man driving a van to the edge of the beach on a hot summer day. He turned on a loudspeaker on top of the van, and broadcast the following sounds so that all the people on the beach could hear: first you hear the sound of a pop can being opened; then you hear the sound of him drinking the pop; finally, you hear him let out a satisfying “Ah!” The next scene shows all the people on the beach moving toward the van to buy a pop. Did the man create thirst in all those beach bums?? Or did the sounds simply remind people that they were already thirsty, and demonstrate how their thirst could be quenched??

The word from the cross today is: “I thirst.” It’s very simple, very concise, but also very revealing. The word for the crossword puzzle today is “thirst.”

On some television shows, a condemned man is offered a last request, and quite often that request is a final cigarette before he is executed. Jesus, a first century condemned man, asks for a drink. This would not be an unusual request. Today’s high in Jerusalem was about 27 degrees, and it’s only the beginning of April. Besides the temperature, a crucified man’s laboured breathing and the pain of having hands and feet nailed to the cross would cause a man’s mouth to become parched and dry. This simple request might seem insignificant as we consider all of Jesus’ words from the cross, but let’s reflect on the implications of this apparently logical request.

Jesus’ appeal to have His thirst quenched on the cross highlights for us once again the teaching that Jesus was truly human. We teach that Jesus was a true man, 100% human – not just half human like the centaur of ancient mythology – but fully a man. His humanity was confirmed by His thirst on the cross. This teaching has a firm Biblical basis as is seen from several other aspects of His time here on earth. The genealogy of Jesus’ ancestry is recorded both in the Gospel of Matthew and Luke to show His place in the people of Israel. The whole Christmas story in Luke 2 demonstrates that, although the circumstances were unusual, He was born in a very human way. Martin Luther affirms in his explanation of the second article of the Apostles’ Creed that Jesus was ‘true man, born of the Virgin Mary.’ Luke 2 also records the only account of Jesus’ childhood between His birth and His ministry. Twice it mentions Jesus’ physical growth, the same as any human child. During Jesus’ ministry we see His divinity come through loud and clear in His teaching, His healings, His miracles, but we also read several examples of Jesus’ humanity.

– When, after fasting in the wilderness for forty days, Jesus faced the temptations of Satan, He experienced hunger. What human being would not be hungry under those circumstances??

– When Jesus and His disciples were in a boat one day on the Sea of Galilee, He was overcome with weariness and fell asleep in the boat even though a squall arose on the water.

– Jesus expressed true human emotions, complete with tears of sorrow, when He went to visit Mary and Martha after His friend, and their brother, Lazarus had died.

– Jesus, Himself, suffered and experienced great anguish (to the point of sweating drops of blood) when He prayed in the Garden of Gethsemane shortly before He was arrested.

– Finally, ultimately, Jesus encountered death – the experience from which no human is spared.

All of these things together demonstrate clearly that Jesus was true human – 100% man.

3. Why did Jesus need to be human?

Why was it necessary for our Saviour to be truly human?

First, it was necessary for the Saviour to be true man in order to take our place under the law, to live out the law perfectly and obediently, to be the kind of human being God intended for Adam and Eve to be from the very beginning, the kind of human being God intends us to be. Jesus said in Matthew 5 that He did not come to abolish the law but to fulfill it. Paul wrote in Galatians 4 that “God sent His Son, born of a woman, born under law, to redeem those under law.” Jesus perfectly loved both God and His neighbour, thus completely fulfilling the law.

The second reason why Jesus had to be true man was to suffer the punishment that God’s law requires for transgressors, and to die in our place. Hebrews 9:22 affirms that “without the shedding of blood there is no forgiveness.” This was true in the Old Testament but it referred to animals… lambs, goats, bulls, birds. But none of these animal sacrifices was the perfect sacrifice. Other blood needed to be shed… the blood of a man for the life of a man, but not just the blood of any ordinary man. Psalm 49 says that “No man can redeem the life of another or give to God a ransom for him – the ransom for a life is costly, no payment is ever enough.”

First of all, only Jesus’ fulfilling of the law would be sufficient for all people, as Paul said in Romans 5:19 – “Through the obedience of the one man the many will be made righteous.” Last Sunday, our Epistle reading from 2 Corinthians 5 said that “God made Him who had no sin to be sin for us so that in Him we might become the righteousness of God.” Only a God-man’s perfect obedience could make people righteous, all people righteous.

Secondly, Jesus’ life and death would be a sufficient ransom for our redemption. Although no man can redeem the life of another, a few verses later in Psalm 49 the psalmist states that GOD will redeem his life from the grave. The New Testament agrees. Jesus says that He came to give His life as a ransom for many. In his first letter, Peter says that we were redeemed with the precious blood of Christ, a lamb without blemish or defect. Because He was perfect, because He was God, Jesus’ blood shed on the cross worked our redemption and forgiveness.

The third reason why Jesus had to be true God was because only God could overcome death and the devil for us. Paul wrote to Timothy about God’s grace that was revealed through Jesus who destroyed death. The writer to the Hebrews refers to how Jesus shared our humanity so that by His death He might destroy him – the devil – who holds the power of death.

So, the Saviour for humanity needed to be both God and man – fully God, truly human. We have already heard of some aspects of Jesus’ life which show His humanity – including His thirst expressed from the cross. We could do an entire Bible study on the divinity of Jesus, but for now let us just say that the Scriptures: 1) use divine names when referring to Jesus; 2) speak about His divine characteristics; 3) relate His divine miracles and work; and 4) render divine honour and glory to Him. Jesus was indeed true God and true man.

I could quit here… maybe many of you wish I would… but I won’t. As we consider Jesus’ thirst on the cross it is a good opportunity to reflect on a thirst that most people have… to know what gives meaning and purpose to life. Here are some of the answers people find:

Learn, earn, yearn, burn – these things may quench a superficial, shallow thirst for meaning and purpose in people’s lives. But to really have a thirst for life quenched, we need to consider one more rhyming answer… Christianity says, the cross on Calvary says: “Turn… to God.”

6. Living water for the thirsty

The Old Testament issues the invitation: “Come, all you who are thirsty, come to the waters; and you who have no money, come, buy and eat!” There is a similar invitation in the New Testament. It’s found in the story of the Samaritan woman at the well. The story actually begins with Jesus saying the same thing as He did from the cross: “I am thirsty.” But in John 4, He says to the woman, “Will you give me a drink?” Besides being another expression of His humanity, that was also a way to open up a conversation with the woman about having her life’s thirst quenched. Jesus concluded that conversation by saying, “Whoever drinks the water I give him will never thirst. Indeed, the water I give him will become in him a spring of water welling up to eternal life.” So, in reality, far from Jesus being physically thirsty, He is the one who quenches a person’s spiritual thirsts.

If there is something in your life that cannot seem to be quenched, some deep longing, then Jesus with His offer of ‘living water’ is who you are looking for. His water wells up to eternal life. Anyone who drinks of it will never thirst again – of course not physically, but spiritually. That water, which ushers in eternal life, is the forgiveness of sin, peace and righteousness with God. Those thirst-quenching gifts of God were won as Jesus hung there on the cross. It was on the cross that Jesus was Himself thirsty. Now, He lives to quench the thirst of all humanity with the gifts He won by virtue of His humanity and His divinity on the cross. He wants to give those gifts to YOU! If you would look to Him in faith and say, “I thirst, I thirst for some meaning in my life, some purpose, I thirst for your forgiveness, your peace, your salvation, the gifts that spring up to eternal life,” then Jesus will, according to His promise, freely grant you those gifts and quench your thirst. Go to Him today.

I know that many of you have turned to Jesus for the quenching of your spiritual thirsts. Yet I hope that you still thirst, just not in the same way. Rather I hope that you continue to thirst for an intimate communion and relationship with God. I hope that you continue to thirst for the strength and power you need from God to gird you for the heat of everyday living, the heat of increased daily pressures, threatened relationships, crumbling health, evil spiritual forces. These things threaten to dry up our spirits and parch our peace with God. But the one who thirsts for God and meditates on His Word is “like a tree planted by streams of water” which never withers. We find our spiritual strength in the Word of God, but we quite literally have our spiritual thirst quenched in the Lord’s Supper, in which – even today – we take part in the Sacrament of Christ’s body and blood. There, on the altar, is the ultimate thirst-quencher for the spiritually thirsty soul, the concrete evidence of Christ’s presence among us. He thirsted on the cross, in order to provide us with this special Sacrament which draws us close to Him and relieves the thirst of our spirits.

So come, come today, and have your thirst quenched for eternity, by Christ – true man and true God – the one who thirsted in our place, and the one who provides the living water by which we thirst no more. Amen. 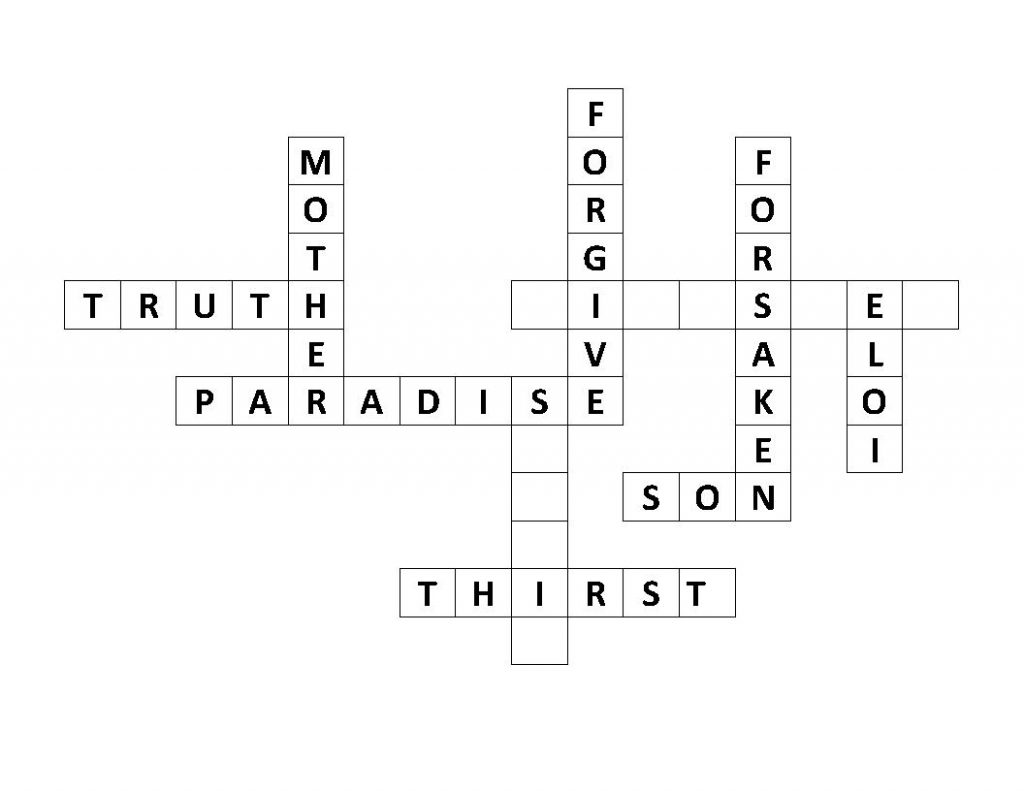