Thirty-three years ago at this very time of year, there were clouds of discouragement hanging around our house. We were living in Unity, Saskatchewan and I was the pastor there, but I had already accepted the call to be the pastor at Immanuel Lutheran in Winnipeg. We had made a quick one-day trip to Winnipeg in January 1989 to see the church, meet some of the church council members, and, most importantly, buy a house for our family to live in. That had all taken place in about 13 hours, and we were days away from the movers coming and loading up our household. You’d think that the excitement of moving would dominate our moods. However, the clouds of discouragement would not dissipate. You see, we had a house for sale in Unity and there were no serious potential buyers. The house was less than three years old on a large pie-shaped lot, and we thought it had an attractive floor plan. However, no one in town was interested. It didn’t help any when people that we knew kept asking if we’d had any offers.

We began to wonder and worry about how we would make two mortgage payments, and for how long. We wondered if it would have been wise to rent in Winnipeg instead of buying and committing ourselves to those payments. We wondered how we would provide for our young and growing family. The devil can easily plant worries in your mind and make you feel that way. He can even lead you to doubt God… did He really want me to take that call to Winnipeg? If He did, why isn’t He providing for us as we expect and need? Is He really there at all? In a way, we were feeling abandoned and forsaken by God right about then.

I bet you’ve felt that way at some point, too. Perhaps you remember an occasion as a child when you felt forsaken by your parents… when you got lost in a store, in a crowd of people, or at the big city exhibition, or when your parents went out and left you with a babysitter. Maybe as a teenager you were deserted by your best friend, or dumped by your girlfriend or boyfriend, and you felt as though nobody liked you. As an adult some of you have been abandoned by your spouse. Either there has been a marriage break-up or some kind of abuse has occurred or a lack of trust has developed. Others may feel forsaken by a loved one who has died prematurely. Still others feel deserted by family members who have moved away from home – and I think it’s worst when parents move away from home. Or maybe, like we did thirty-three years ago, you have felt abandoned by God, Himself… when you were sick, when you lost your job, when a relationship disintegrated, or when you faced financial problems. When times are especially tough, we are so quick to ask: “Why?” or “Why me?” Maybe you are feeling forsaken, maybe you are asking those questions right now.

If we really analyzed the situation objectively, we would realize that everyone undergoes times of trial and struggle, and although the next person’s struggles may be different from ours, everyone asks “Why?” Sometimes they ask, “Where… where are you God when I really need you?” People ask those questions because they feel that way, they feel abandoned, forsaken, deserted by God. At those times, we fail to consider the possibility that we deserve to be abandoned by God, forsaken by God. For all those times that we’ve sinned, that we’ve fallen short of God’s standard, that we’ve failed to live up to His expectations, for all those times that we’ve forsaken God and rejected Him, we certainly deserve to be abandoned by God.

In fact, there’s only one man who didn’t deserve to be abandoned by God – and that man is Jesus Christ, the only human being that was ‘tempted in every way, just as we are – yet was without sin.’ Not once did Jesus fall short of God’s standard, not once did He fail to live up to God’s expectations, not once did He forsake or reject God. Yet this Jesus also felt abandoned and forsaken by God, on the cross, on Good Friday, and He, too, asked that “Why?” question. “At the ninth hour Jesus cried out in a loud voice, ‘Eloi, Eloi, lama sabachthani?’ – which means, ‘My God, my God, why have You forsaken me?’”

And so the “Cross-Words” that we want to add to our crossword puzzle today are “Eloi” from the Aramaic form of the question, and “forsaken” from the English translation.

We might ask why Jesus would feel forsaken by God the Father when:

Was there a power struggle in the God-Head… Jesus, the Son, wanting the ‘cup’ of suffering and death to be taken away, but God the Father insisting that He go through death? No, if there actually was abandonment, it was not for this reason, for this death was precisely the Father’s path for the Son to take, and Jesus knew it all along. In fact, He had predicted it to His disciples several times. The abandonment was not because their paths, their wills diverged on this point of death. Bible commentator William Barclay explains: “Up to this moment Jesus had gone through every experience of life except one – He had never known the consequence of sin. Now if there is one thing sin does, it separates from God… It may be that at this moment that experience came upon Him – not because he had sinned but because…” He bore the weight and consequence of all human sin, and that separated Him from the Father, and made Him feel abandoned and forsaken. Jesus quite literally felt as if the Father had left Him as dead. Yes, it was God’s wrath over sin that fell upon Him in that hour, but that wrath of God was His wrath for the whole sinful human race. It was our sin, yours and mine, that caused Jesus such agony, that made Him experience forsakenness and separation from the Father, for Jesus bore it all, on His shoulders, on the cross. It was our sin, yours and mine, that prompted Jesus to ask His question: “Why have You forsaken me?”

4. Hope and Encouragement in the Question

Yet in that very question we also find hope and encouragement. His question doesn’t begin with the word ‘Why’ but with the word ‘My.’ “My God, my God…” or in Aramaic “Eloi, Eloi…” “El” – the letters E, L – is the word for God in Hebrew. Maybe you’ve heard some terms for God that include the word “El” – like “El Shaddai” or “El Elyon”. That’s also why so many Biblical names – especially prophet names – have “El” in them… like Elijah, Daniel, Ezekiel, Elizabeth. Their names all mean something directly associated with God. When Jesus cried out “Eloi, Eloi…” He affirmed His relationship with the Father… “MY God, MY God…” Even in His intense feelings of forsakenness, He knew that the Father, His Father would both hear and listen. In His despair, in His hopelessness on the cross, Jesus still clings to the words of Scripture, just as He did when He faced the first temptations of Satan in the wilderness. Now from the cross He utters words that were first spoken in Psalm 22. That psalm ends in the cry of triumph, “for He has done it!” So also here, we hear in this question the agony of one suffering the experience of abandonment by God, yet certain of ultimate vindication and triumph at the end, for He has done it!

“My God, my God, why have You forsaken me?” This question deserves probing for the answer. Why did God forsake Jesus, His own Son, His only beloved Son, there on the cross?

You know, sometimes when a family breaks up, one or other of the spouses is charged with desertion, and often the desertion is a matter of deserting one person to be with another.

Isn’t that exactly what God did? He deserted and forsook Jesus for the sake of, for the benefit of… YOU! If He had not forsaken Jesus, but rather would have delivered Him from that cruel suffering, He would have forsaken you instead. He would have abandoned your only opportunity to be delivered once and for all from the sin which afflicts you and stands ready to condemn you. Why did God forsake Jesus? For the sake of you and me… that’s why!

6. Promises not to forsake US!

Although the results of God forsaking Jesus on the cross have future meaning, there is a side-effect for the present, too. There is especially one blessing that we can hang on to today, despite any feelings of desertion and abandonment that we may have. Although God the Father forsook Jesus, there, on the cross, we can hang on to His promise to never, NEVER, leave or forsake us. It is one of the most common refrains that runs through the Bible, almost like a stuck record. It was like everybody and his brother needed to be reminded that God was with them, that God was their God. Listen to these passages:

Deuteronomy 4:31 (to the Israelites on the last leg of their journey to the Promised Land) – “God will not abandon or destroy you or forget the covenant with your forefathers.”

Deuteronomy 31:6 (to the Israelites just before crossing into Promised Land) – “Be strong and courageous. Do not be afraid or terrified… for the Lord your God goes with you; He will never leave you nor forsake you.”

Joshua 1:5,9 (to Joshua as he began his leadership of the Israelites) – “As I was with Moses, so I will be with you; I will never leave you nor forsake you… Be strong and courageous… for the Lord your God will be with you wherever you go.”

1 Kings 6:13 (to King Solomon) – “I will live among the Israelites and will not abandon my people Israel.”

Psalm 94:14 (an unknown Psalmist) – “The Lord will not reject His people; He will never forsake his inheritance.”

Romans 8:31,38,39 (God is with us through thick and thin)  – “If God is for us, who can be against us?… Nothing in all creation will be able to separate us from the love of God that is in Christ Jesus our Lord.”

This is God’s message for you, today: “He will NEVER forsake you, or abandon you to go it on your own.” It’s always refreshing to realize anew that God speaks to us where we are. I don’t always know what situations people are experiencing in their daily lives, but God knows, and He speaks to us – words of comfort, words of encouragement, maybe sometimes words of rebuke, but always these words of promise are relevant: “I am with you always, I will never leave nor forsake you.”

A little girl was walking with her father through the downtown streets of the city to which they had recently moved. They turned corner after corner, in the shadows of tall building after tall building, taking in one new sight of the unfamiliar city after another. After some time the little one looked up and asked: “Daddy, are you lost?” Instead of answering her directly, he tightened his grip on her little hand and, smiling warmly, asked: “Why, are you lost?” 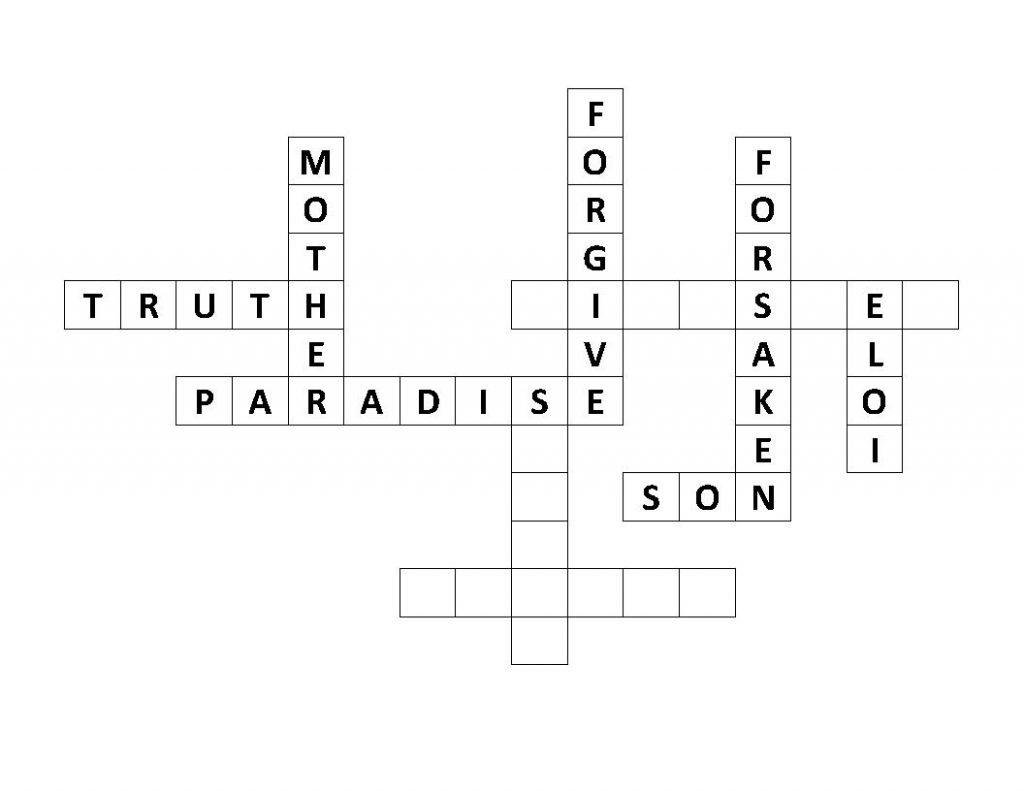